I’d suggested Helvellyn and the Dodds to my girlfriend earlier in 2018 as a suitable route for a long challenge in the Lakes, without the likely need for extensive navigation.  Closer to race day I  prepared route maps with key notes to aid Rose from checkpoint to false summit and trod to key rocky outcrop.  I hoped visibility would be fine and this desktop assistance might reduce stress.  In the end I simply increased her worry and the macro-assistance would prove largely meaningless in a micro setting.  Welcome to Lakeland fellrunning where local knowledge is everything.

In short: we both crossed everything for fine weather and good views.

Arriving the day before we took advantage of staying nearby to walk part way up Clough Head.  I’d rightly assessed that this monster could be pivotal both at the start and towards the end of the race when tired.  In clear visibility, looking up at the huge monolith of a mountain, I pointed to hill features and correlated these to the map and Wainright book.  I needn’t have worried about route choice as the way had already been marked with red tape by organisers from the tarmac end to the summit of Clough Head.  Still, under the warm afternoon sun the steep north face provided moments of trepidation.

In short: we both wished for cooler temperatures plus fine weather/ good views.

Race day was warm, mid-20s and Lakeland dripping in sunshine.  Like many others I was also soon dripping but in sweat.  The first two miles are tough; runnable at first and then WHACK – the green wall of Clough Head seemingly grows higher and steeper.  Behind, Blencathra towered dark, high and mighty under a cobalt blue sky.  Across the gravel coach road beyond the reeds the race route immediately rises to nothing short of a grassy staircase.  Little wonder folk attempting the Bob Graham do this bit almost blind, in darkness, powered only by torchlight or the stars.

And then the devilish wind suddenly emerged.

Any meaningful attempt to resume effective running beyond the crest towards the summit was thwarted by gale force gusts.  Essentially this wind from the east (or the left on the way out, Helvellyn, then the right on return) remained strong and gusted at intervals when you lease wanted it.  Only on a few short occasions did it completely disappear.  When it did, the fells immediately became a furnace and it felt like my vest was melting to my skin, much like a crisp packet in an open fire. 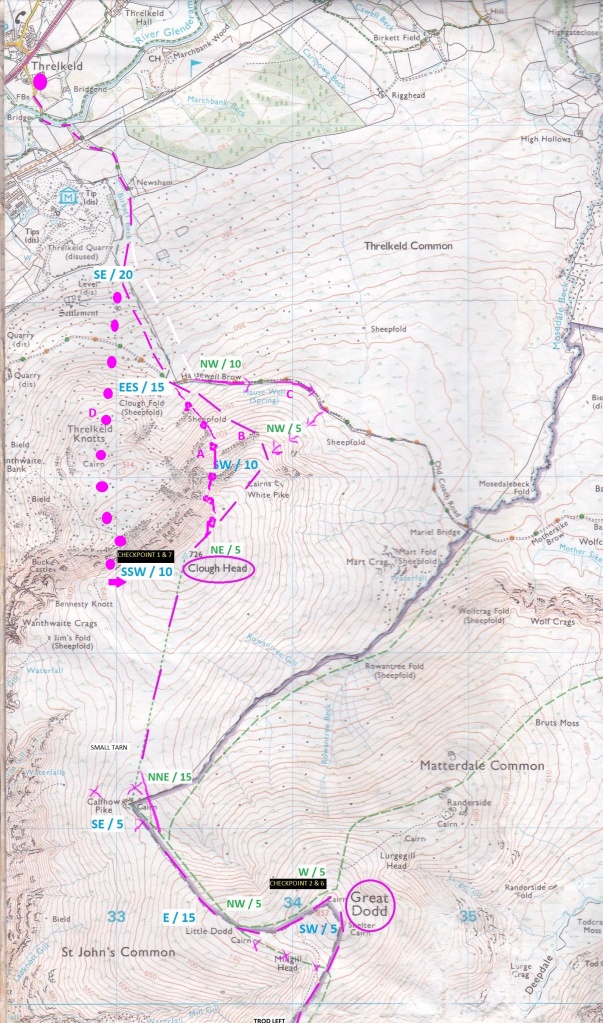 The legs soon found some energy as I passed through the Clough Head checkpoint and on to the uneven grass path down to and then skirting left of Calfhow Pike.  Veering from a southerly to more easterly bearing, the route slowly rises, arcing round towards the next summit of Great Dodd.  The wind had thankfully reduced to only a gentle breeze here, but as I trudged towards the bald summit it again intensified to buffeting gusts that drowned out the words of summit marshals.  They could’ve been saying dib here, scan to sign your life away or only death awaits out there.  Despite this audible confusion and alerts of potential doom the views were brilliant over Ullswater and beyond to the Eden Valley.

Ramblers occupied the smoothest lines on the next descent.  I remember thinking  a few things here: first, Helvellyn looked a long, long way away; second, why was running downhill seemingly requiring more energy than usual; and third, Rose will probably kill me for describing this ridge as undulating.  I battled down to the next shallow col and tried to saturate any bad thoughts for hikers with walking poles, effortless laughter and tightly-fastened wide-brimmed sun hats.

I’d long since removed my running cap for fear an imminent gust would removed it from my sweaty head and transport it through the air towards Keswick.  My tartan buff now acted in dual purpose: (hopefully) preventing my forehead from turning crimson while absorbing the trickly tap of sweat from the top of my head.  The contour trod to the west of Stybarrow Dodd was found and negotiated with ease, albeit leaning into the fierce wind that tried to blow all runners down the open gradient to the right.  Runners ahead then incorrectly navigated directly ahead towards the summit cairn of Watson’s Dodd.  I knew there was a trod off to left sooner that cut out the corner and removed the need to do a little extra climbing.   As I bore left across open grass I observed another runner further left still.  As Sticks Pass emerged over the ridge I realised that by some distance even I’d missed the ‘obvious’ trod.  On the return the line is abundantly obvious, in clear visibility anyway.

Beyond the crossroads at Sticks Pass I was making steady progress up over the rocks and crags towards Raise when a yellow thunderbolt whizzed by.  The first three runners, all from Keswick AC, were already on their return.  A bit like witnessing Finlay Wild descending at Ben Nevis, the grace and elegance of elite fellrunners – especially over rocky, technical terrain – is just as majestic as a ballerina on a floodlit stage.  Only later would I learn that as I reached the Helvellyn halfway Carl Bell would cross the finish line Bck in Threlkeld.  In the moment I returned upwards in my own unique elegance and reached the cut-off with 15minutes to spare.

In short: I was tiring and with some confidence hoped that Rose would also reach the target.

A steady stream of runners quickly fizzed past.  The struggle up from Whiteside to Lower Man was arguably the hardest and hottest of the day.  The wind had decided to bugger off and annoy someone else when I would quite gladly have accepted a refreshing blast to exposed skin.  The unrestricted views down the ridges to the left and towards the shimmering Ullswater were breathtaking.  I started to dream of being in the water.  To the right, westwards, the higher peaks shimmered under the sweltering sun.  More hikers appeared which signalled the summit of Helvellyn was nearing.

I was pleased to see Rose, now beyond the cut off, and we shared an embrace between Lower Man and Whiteside. She blurted out ‘A22’ and, slightly perplexed maybe with the early onset of heatstroke, I replied with the more obvious ‘keep going, about 15mins to the summit’.  Later, she reminded me that we’d had a top-dollar conversation at the campsite the night before.  Subjects included Munros and Corbetts, egg fertility and also the roads of England that traverse coast to coast.  Who says that nights under canvas don’t get crazy, eh?  She’d promised to offer a suggestion when we met on the out-and-back.  I’d forgotten or was more concerned with survival.  Bravo to her for evading heat stroke and remembering the important things, mind.  Pity the A22 isn’t a contender though.

Back to all roads returning to the finish which quickly introduced fresh challenges: (i) severe abdominal cramps, likely induced from dehydration; (ii) an overwhelming urge to scream ‘feck off’ at the now annoyingly gusty wind that never provided any assistance up any of the 10 climbs; (iii) miserably failing to alleviate nausea after taking an energy gel (increased the sickly feeling); and (iv) consuming an electrolyte drink (poured over face due to wind sweeping my arm).  I even resorted to internally plotting the coastal countries and capitals around Africa; this was abandoned while in the armpit of the continent when I tried to recall the capital of French Guiana (I later acknowledged that this was in fact in South America).

Even uphill marching was now a struggle.  The rises over Watson’s and by Stybarrow Dodds were hot and humid.  I nearly lost the will up towards Great Dodd and concluded that in recent weeks the results of my reduced running was now being displayed.  Worse was to follow.  I was startled into life at the summit as a fellow runner almost commenced a direct race line – without a recognised path and significantly more ascent – from Great Dodd to Clough Head (understandable in poor weather maybe, but unforgivable in clear visibility).  I bellowed in the gale force wind and flapped my arm to the left.  She seemed to acknowledge my instruction and altered her direction of travel.  Had she continued this would’ve been much like attempting the straight side from the top of a capital letter D, when the curve is the greatly preferred route.

In short: she would most likely have blown up, plus her inability to say thanks when I passed suggested she was already wilting.

The strong wind then blew hard, from behind, on the descent back to Calfhow Pike.  As Darren Fishwick said later, even more energy was needed to brake as the wind pushed you downhill at a speed you didn’t want and at a time in the race when your body wasn’t in an ideal condition to respond.  On the final climb up to Clough Head, I actually felt ok – I even managed to run-shuffle upwards and offered some words of encouragement as I passed another runner.  Without warning though all my fuses suddenly blew and the grass carpet beneath me was replaced with a channel of thick treacle.

A few minutes later, only walking mind, I was heavily out of breath at the summit checkpoint.  I recall the delight as I approached the cliff edge to see the outline of cricket ground a few miles below.  The steep zig-zagging descent was surprisingly welcome relief.  My legs were shocked to be moving again and both quads didn’t grumble or groan.  The flatter grassy slopes beyond the coach road were a different matter.  Sudden waves of extreme nausea washed through me like being on a small ship in high swells.  Before I reached Newsham cottage I passed a runner who’d bonked to a walk.  He said that he was fine, but could now only muster a walk.  I plodded with deep inhales down the tarmac lane, across the wooden sleeper bridge and almost crawled over the finish line.

In short: I was elated to survive and just get round – yes I’d underestimated the challenge and was very much undercooked in preparation and over-baked in the conditions.

A belting route and is no substitute or lesser the test if compared to the classic horseshoe routes that traverse the craggy fells of the western lakes – but it offers a stiff challenge, nonetheless.

For some time I’d joked that the race name sounded like a tribute act. If Lakeland races did tribute acts then Helvellyn and the Dodds would certainly be just as good as the real thing.