For years I had a visceral loathing of tinned rice pudding.  I didn’t even need to see the contents.  Just a discussion and mere mention of creamed rice could turn me all queasy.  Extend this to actually eating then the thought of the soft, squidgy texture would render me speechless, dry-mouthed and preparing for immediate fainting.  I blame a short scene from The Empire Strikes Back on the planet Hoth.  I’ve adapted somewhat since then.  Some say grown up.  I now occasionally enjoy some home prepared versions.  Still, it’s probably best not to waffle away about some corner pot desserts.

A similar feeling washed over me in mid-July when Rose emailed me a link to a race, Trail de Caussou – a mountain ‘trail’ race in the Pyrenees near to her house where we were staying for 3 weeks from early August.  She highlighted that the route was only 13km and if I wasn’t feeling up to it there was also a hike option.  I’d been laid low you see. Unsure if it was the mention of the relatively short distance or the offer of a walk, but each worked as click bait.  After the briefest of scans I suggested that I’d wait until I’d tried a few runs before deciding.

A week or so later the same queasiness erupted as I stood on the start line at Turnslack in late July.  This was my first race for over 6-weeks: the pelvic tendonopathy was swiftly joined by a recurring virus, seemingly battery-powered by some annoying bunny.  I’d function for a day only to be floored for the next two.  Indeed, the heatwave of 2018 wasn’t my finest spell for mental wellbeing, healthy diet or impressive Strava stats.  My living room rug was my friend and I easily segwayed between coverage of the World Cup, Wimbledon and Tour de France.  I think my segment crown for 9 hours of sport over 5 channels remains firmly intact.  I also devoured litres of ice-cream.  No rice pudding in sight.

Less than two minutes into the Turnslack race and any anxiety about health or fitness was quickly jettisoned.  Marble-sized hail peppered the entire race field.  I joined most other competitors who’d sharply ducked under high bracken or behind stone walls to perform the fellrunner’s equivalent of a F1 pit-stop, and fight into their cag.  8-miles of Pennine lumps and bumps – drier than ever, but still soft in places – provided a good test.  My threshold was reached much sooner than expected and yet I was pleased to finish only a few minutes down on previous attempts.  Unsurprisingly though, I ended miles away from winning either the family pack of toilet rolls or any of the plastic beach toys. Thankfully, I finished in fairly good shape with no illness issues and only slight hamstring grumbles.

Precisely a week later I once more felt nauseous. Similar again to my childhood internal summersault at all things rice and creamy.  The first was that immediate stomach flip when the pre-dawn alarm triggered.  I knew instantly this was international race day.  Next was trying to convince my body, despite the signals of biological anxiety, that forcing down some cereal was really important.  This was followed over an hour or so later that one of only two access roads to the remote start was permanently closed, route barre, due to flood erosion.  I philosophically read this as spiritual intervention.  After all the stress and worry I gratefully accepted that, in the end, the mountain gods only wanted us to enjoy a social run.  Still, with SatNav brain engaged I half-heartedly agreed to follow the best diversion route and see if we’d still make time for entries on the day.

Unsure what the French is for oodles of time, but we arrived with plenty in the small village of Caussou (pronounced Coo-soo). I didn’t need to know what the exact translation is for fearful, as upon handing over our entry forms, medical certificates and euros, I was again full of it.  While I was busy masking my anxiety Rose was mildly concerned about beating the generous cut-off times and obviously not getting lost.  In my head (and guts) I was worried about blowing up or bowing out somewhere remote and unfamiliar.  I even had visions of having to try – through actions and a below par ‘Allo ‘Allo accent – to awkwardly explain to an isolated route marshal that my glutes were shot and I needed assistance.  Carry On Fellrunning?  With a jolt I returned to reality as Rose reinforced that we do this for fun and reminded me the route was only 13km.  I knew that once my feet cross the start line it still becomes a race, even against myself.  And I then reminded her that this race had over 1000m of climb in less than 4km.  This was like Ben Nevis really.

After the first tarmac climb out of the village I never regained my breathing.  My fellow clubmates – holidaying nearby at Pyrenees Haven – were already out of sight, immediately fighting with French compression sock wearing grunters, holding trekking poles and screeching out allez, allez.  I focused on more personal goals.  I tried to control my heart rate and absorb the stunning surroundings.  Small steps and good inhales and slow exhales.  But bloody hell this climb goes on forever!

During the first 2000 feet or so I stayed with a quiet, shuffling group of approximately 10 people.  The route here was mostly on a clearly taped, leafy footpath up through a thick forest.  This group was an even mix of men and women, including one woman whose red shorts had less material than my buff.  Once on the open mountain – grassy and full of tussocks – I fell back slightly.  I was really struggling, probably a combination of virus recovery and altitude.  Equally worrying was that I quickly lost sight of those red shorts. 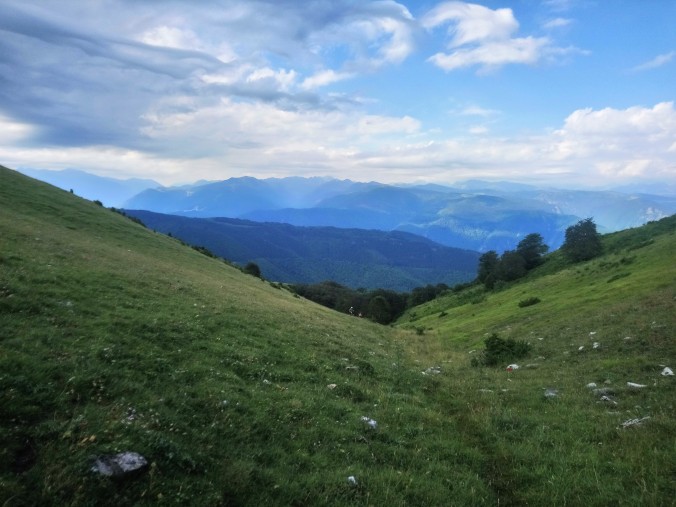 I relaxed a little at the summit checkpoint that peaked out at roughly 6500’.  I soon discovered that my legs had relaxed a lot.  No amount of dried apricots or fruit shot blocks could boost me back into a strong descent.  It quickly emerged that my fitness was almost blown and now the race was just about enjoyment and survival.  Somehow my jelly legs managed to pass many of the trail runners who’d climbed better to the summit.  The downhill section and along an uneven grass saddle was good fun and easy to follow with regular little red flags.  In every direction the views were amazing.  I also self-administered a bonus adrenalin shot as I bounded past those red shorts.

My initial fears and apprehensions rapidly returned though even before the penultimate checkpoint.  Worries of lung capacity and pelvic weakness were uncomfortably replaced by the radioactive glow of my burning soles.  In particular, I spent the final 5km technical downhill section, again through the forest, entirely on my forefeet.  Any accidental or essential heel drop posted an image in my brain of a cartoon blister that throbbed through footwear towards a climatic explosion.  Bit of shame really as normally I would have really thrown my vast gravitational weight at this section.  Still, I trundled back into the village and was glad to finish upright, albeit very leg-wobbly and – likely due to oxygen-depletion – smiling like the French village idiot.

In return for your bib number un bière pression was secured and there was a four-chambered lavoir nearby in which to soak all aching limbs and blistered soles.  One chamber was bizarrely occupied by a giant 4ft long catfish.  A few of my clubmates claimed category prizes, along with Rose, who’d safely navigated her way round and on to the podium as third quickest auld lass.  She seemed dazed by the announcement, mind.  Maybe this was a combination of too many dried apricots or the stiff exertion in the haute montagnes.  Or perhaps it was the frothy beers for lunch?  Her prizes included an array of luxury items such as bandage on a roll, boiled bonbons, a hairbrush and foot deodorant.  Chapeau to her.  Turnslack prize awards seem to have a rival.  Thankfully, there was no rice pudding or a corner pot equivalent.