It started one morning with a call from my Dad.  ‘There’s space on the FWW3 if you’re interested…{insert silence}… It’s Frank’s stag do’.  He’d got married a few years ago, I recalled.  But then the stag do was so successful that it’s been an annual event ever since.  This year – Frank’s Wild Weekend 3 – a few berths in the bunkhouse were surprisingly still vacant, so the net was extended out a bit further.  Did I fancy the trip?  Possibly yes.  A number of things to firstly consider:  where was the weekend to visit; could I face a potentially long car journey over the border and beyond; and would I recover sufficiently (from the outdoor activities/ intake of alcohol) in time for the Three Peaks Race?

Kinlochewe, Wester Ross was the destination.  Beyond Inverness, turn 90o west and travel through several functional towns with nondescript homes that are dwarfed by neck-turning scenery at every cattle grid.  The landscape, weather and to some extent the people are gritty and hard: think Game of Thrones, but minus the hobbit sex and incestuous relationships – actually, maybe just the hobbit sex.   This is remote Scotland where men are men, and sheep are scared…

While away, I joined a group run around the Heights of Kinlochewe to gasp at the stunning Fisherfield Mountains from Lochan Fada.  This was described as a 10 mile flattish adventure that might get a tad blustery at the lochan bealach.  The 15 mile loop was anything but flat, although I really enjoyed the long climb in the first half and then the technical descent was all good training.  Less said about the burn crossing or driving snow, mind.

Also, after an initial walk with my Dad, I then enjoyed a solitary climb up a steep-sided and snow blasted Corbett – Meall a Ghuibhais – followed up the day after with a sharp 5 mile/ 1200 feet blast on trails, heather moorland and woodland tracks.  Lots of ideal climbing for the Three Peaks and severe impact on the quads. 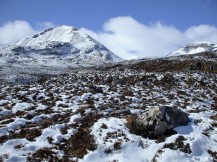 Either side of the long journey to the frozen tundra of the north, I’d enjoyed training runs out over the Three Peaks Race route.  Prior to the Scotland weekend the weather had been decidedly wintry and as I’d pointed out to my girlfriend this might be invaluable on race day.  I really didn’t beleive this, though.  Surely the weather would be better than the freezing temperatures and snow showers experienced in 2015?  Then, after the Highland adventure, I was sun-drenched on a wa’m, blue-sky day out up and down Whernside.  This was how I hoped the Three Peaks Race would be.

And now, with almost 72 hours until the big day snow if falling outside and all peaks are expected to be white, bogs will be treacherous and the going will almost certainly be ‘very soft to sinking’.  Running in this weather can be endured.  Marshaling will however be a right challenge.  All the training has been completed and the added value of Highland mountains was rewarding.  Now it’s nearly time to nobble off the final chunks covering 24 miles of the dales – oh, what shoes to wear over gravel, stone and limestone blocks…?